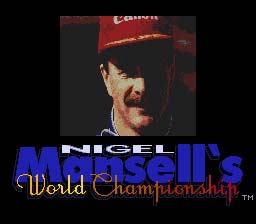 Nearly 20 years in the making, I made a final attempt to vanquish an old foe, defeat Gerhard Berger and finish a lifelong saga.

It’s hard for me to review this game fairly. It has so many things going against it – we’ve been spoilt with superb racing titles in the last 10 years or so, how can I look back and say “it has great handling” when it doesn’t or say “it looks great” when it doesn’t. The simple answer is to be mindful of the era in which it was released and compare it to other games in the genre.

My problem is, I was only seven-ish when I bought it – I thought the Power Rangers movie was the best thing ever at that age, with classic lines such as “Talk about a splitting headache” after a foe was vanquished via sword through the middle of his body. You don’t get writing genius like that anymore.

I tried to keep an open mind about Nigel Mansell’s World Championship, but I found it incredibly difficult. Things start off well for the game; the catchy title music is well suited to a F1 game, plus Nigel Mansell’s face and moustache greet you before reaching the menu – a nice touch.

However, it goes downhill a tad. I hadn’t played the game for more than 16 years, so I opted for the Mansell’s Advice mode. In this, you pick a circuit and Nigel kindly guides you round the corners offering sound advice. Choice soundbites include “slow” and “fast”, and if you do well you are rewarded with the word “good”. No wonder Nigel was an F1-winning god. It’s pretty exhilarating stuff and all the while Nigel’s pixellated face is staring at you like some old man in a park. I was always disturbed by his face and moustache. I didn’t even know who Nigel Mansell was aged seven, but here he was giving me the sort of advice men like to hear from their girlfriends; “slow”, “fast”, “good”.

It’s not too long before Nigel has divulged too much of his expert advice and I opt for an actual race. Although it’s been many years since I’ve played this, there is one thing I do remember; Gerhard Berger.

I’ve never forgotten that stupid austrian and his winning ways. I barely ever won a race as a kid and when I lost, it was always to Gerhard bloody Berger. Never anyone else. He was always there, just in front of me, first on the podium.

He’s like the guy who seems to have everything. Every male knows and hates one. You go after the good things in life, but he gets them not you – stunning girlfriend, loads of cash, big house and a flash car that signals to all others he is a knob. We don’t want to be knobs, but we do want the car. Somehow this guy doesn’t deserve these things. I worked hard at school and what have I got? I’ve spent hours driving around the Australian GP until my thumbs became a distant memory. I DESERVE to win, but what do I get? I get to hear the Austrian national anthem after each race. I hate Gerhard Berger.

I decided to try one last time to defeat my lifelong foe. I opted for the Monaco track bizarrely – you know, the one notorious for the lack of overtaking opportunities. It seems I have a penchant for pain and suffering; something I’ve tried to keep on the quiet and, usually, in basements.

The game does allow you to choose various parts on your vehicle, such as wheels, gear ratio and aerofoil, to suit the prevailing weather conditions. I’d actually forgotten about the tuning section, but I never bothered with it back then, so I chose not to bother now. If I was going to beat Berger, I wanted to do it with the same settings I had all those years ago.

On the grid, I notice my surroundings and the environment. I particularly notice the Monaco track is lacking a few things. Well, it lacks pretty much everything. Bar a few hotel-like buildings in the distance, there is absolutely nothing else that even tries to provide the impression of the Monaco GP’s grandeur. I’m aware this is the SNES, but even some awfully rendered buildings next to the track would have given the feel of a city circuit. This has nothing. It’s empty and all the same – much like the cast from The Only Way is Essex.

There is a tunnel, which is quite exciting for all of three seconds. And that’s my main problem with this game. I don’t get any excitement from it. In fact, it’s quite easy to navigate the bends providing you brake occasionally. It’s only until you reach the top five positions that your opponents become harder to catch. It almost feels scripted, like the game allows you to pass most other cars and then the real challenge begins.

A lot of Formula One is about the build up, the tension in qualifying, the drawn-out battle between a few drivers, and the pit-stop strategy, as well as Eddy Irvine’s subtle presenting technique and Ted Kravitz’s pointless job. It’s a lot to expect of a SNES game and, unsurprisingly, Nigel Mansell’s World Championship comes up short. In fact, short is a good word. The qualifying sessions are short, the races are short – on default lap settings you rarely need to pit – and the overtaking manoeuvres last about as long as a Greek citizen’s working day. I wouldn’t want the game to be longer either because I never feel like I’m racing around an actual circuit. It’s just a long stretch of road to me with no defining features. None of it is memorable. The double hairpin on Monaco – I didn’t notice it because I barely had to slow down to make the corners. I only figured out where I was because of the tunnel.

Perhaps I’m being harsh. This game clearly wasn’t aimed at seven-year-old, Power Ranger-loving boy. Even today I don’t buy F1 games; I like the sport, but only on television. However, the game seems so conservative. It covers the basics (badly for the most part), attempts some interesting ideas (well, tuning and Mansell’s advice) and that’s about it. Nothing ever happens.

But the important thing; did I manage to beat Berger? Yes, I finally won! After all these years, I pipped him to first on the podium on the very last corner and boy did it feel good. It wasn’t exactly thrilling; in fact the overtake went by with a whimper, but this is the one aspect of F1 the game did get right on a personal level at least. Intentional or not, it fostered a deep rivalry between me and Berger. A rivalry that has spanned nearly 20 years and this, perhaps, is the game’s one saving grace. The feeling of relief that my near lifelong struggle was at an end and, for that reason alone, it was worth dusting off this game to savour sweet victory for the first time.