The First Rule of Super Punch Out is…

Thanks to political correctness gone mad, the days of watching a midget fight a booze crazed Russian called Vodka Drunkenski in a south east London pub are sadly gone. The magic of those far off nights – and the fine athletes they produced – are, however, celebrated in Nintendo’s Super
Punch Out series, written by Genyo Takeda.

Takeda showed a love of delicate things at an early age,
when he would build tiny trains and automobiles at the family home in
Osaka. Quite what inspired him to come up with this charmingly brutal series is therefore unclear, but he went on to effectively trademark cartoony violence in ice hockey, wrestling and American football games, all successfully aimed at the US market. He would probably do one for bear baiting,
given half a chance.  But enough speculation – it’s time utter those immortal words Seconds away! No punching below the belt and the first one to blub is a
lady! as we stick our gumshields in and prepare for Round One.

There are a few versions and ports of Super Punch Out, or, as it was originally called, Punch Out.  There is however very little difference
between them with the exception that your character – Little Mac – was drawn in
wireframe in early versions.  This was
because your view is over the shoulder of Little Mac as he bobs and weaves and
gets slapped about all over the shop, and it was hard to see the opponent. In later versions, Little Mac became even
littler when, to save late ’80s arcade game processors bursting into tears
under the strain, he was fully coloured in, but much smaller. This gave the
player a clear view of whom he was up against, and made the whole thing look
far more pleasing. 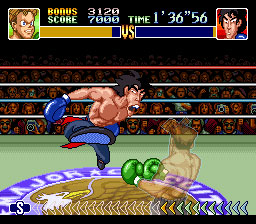 Playing the game is pretty straightforward. You float like a joystick and sting like a
fire button. Your opponents could be a variety of characters, depending on the version you were playing, but it was
all the same deal – land punches on an ethnic or gay stereotype to defeat
him. The Italian opponent is called Pizza Pasta, for Heaven’s sake. Anyway.
Keep defeating opponents and you eventually, in the appropriate version
anyway, get to fight famous pugilistic nutcase Mike Tyson. Some of the
contenders that you’d have to overcome first sound like a bunch of gay
strippers, though.  Super Macho Man for example is a Californian body builder who kisses his muscles to taunt you and make you feel nervous. His special move
is probably something to do with poppers.
Piston Hurricane’s special move involves jumping suddenly and landing a
flurry of punches, whereas Mexican wrestler Masked Muscle will headbutt you if
you are unwary. In the original Punch Out, the player had no duck move,
but this was rectified by the time the game evolved to Super Punch Out, which allowed the player to utilise tactics such
as dodging special moves and hammering his opponent on the blind side.

That, then, was Super Punch Out. Great fun, a bit lazy characterisation-wise, but for all that en endearing journey into comedy boxing. It’s downloadable on just about every platform there is, so there’s no excuse for not getting stuck in.